- November 30, 2009
It is already a few days come pass that I haven't do any comment on the top news headlines. If before I do comments about the the news in Bahasa but today I will try to comment it in English for the purpose to improve my English coz I know only practice will make you become perfect.

This issue is really hot today, Nik Aziz who knows deeply about Islam did a doa that Malaysia to be damaged and crushed if Datuk Seri Najib Razak lead Malaysia for next few years. Yes, it is not a problem if you have different politic understanding between u and your government but one thing that u must know that please don't do the doa hoping Malaysia to be damaged or crushed coz it is unfair to others and as a religion scholars I think he know more. 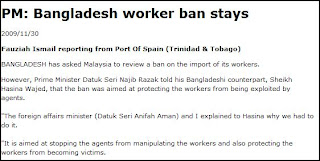 Actually I look this matter from two perspective, pro and con. From a good side, we can give our own citizens jobs instead of hired foreigners then it will make our GDP  to develop at a steady growth. While from the negative side I see this matter will make diplomatic relationship between Bangladesh and Malaysia to be at risk. I think what Bangladesh try to do now is to find a solution as a threat to Malaysia if this Ban thing continue. 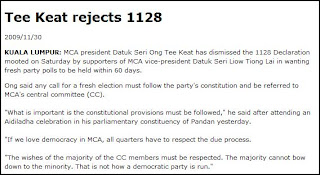 Declaration 1128 is a declaration that limited President's power. Of course, Tee Keat will reject it coz as a president who always wants power this limitation will make it difficult to manage this biggest chinese party. However, as a good leader and president, Tee Keat have to accept it coz it is from the voters and the members. He will accept it if he trust in democracy, if not there is no meaning in MCA anymore.

Today this project really offers a number of jobs, I hope it will generate more jobs to be offered when this project expected to be completed in and will give a big impact towards Malaysia GDP. I also expected that there are a numbers of SME will be developed around the area...insyallah. 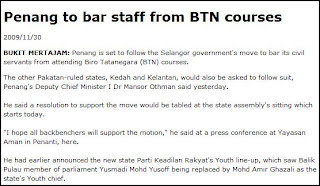 If a few days ago, Selangor bar their state''s staff from BTN courses, today Penang does it and I think maybe after this Kedah, Perak and Kelantan will do the same thing. All these thing happen because of politic...huhu. From my own experience, BTN not talk about politic but what it touch is about 'ketuanan melayu' and patriotisme. Whatever it is the power belong to the state's government to determine the best for its workers. 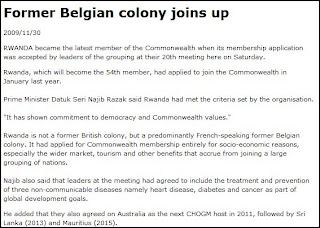 Yesterday Commenwealth accepting a new member in their organization. The country that I  mean is Rwanda from yesterday Rwanda will invited to any conference like CHOGM, Commenwealth Games and etc. I want to say welcome to this country and hope this will helps this country to develop economically, potically and in better diplomatic relationship between countries in the Commenwealth. 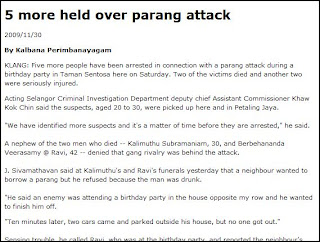 Parang in the celebration of birthday, I don't know what happened to those people today. Lost their mind and do something really out of sense of human being. Where is our humanity, where is our feeling, where is our sympahthy....huhu I really sad with this world, more modern our world, more poeples will become the victims...huhu. 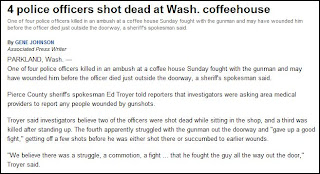 4 police officers shot dead at Parkland, Wash Coffeehouse.....ermmm I don't want to comment it in a long words....just enough to say that this world development produces a human without feeling....huhu 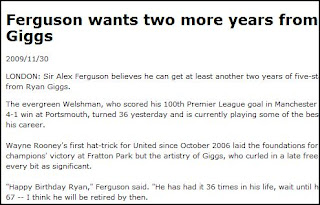 Two years verbal contract as a  birthday present for Ryan Giggs is quite enough to tell us how much this player value is. I admired Giggs as one of the players that steady played in EPL although now he is 36 years old, quite old for a midfielder like him. His goals during last match with Portsmouth that sometimes age does not tell us whether a player fitness. Whatever it is I hope the best from him to help Manchester win this season's EPL and Champions League.

yes, i totally agree nik aziz shouldn't have said that. i was shocked that came out of an ulama. maybe it just slipped out of him.

as for the btn issue, i don't see why they don't want their workers attending it. the main content of btn is to know malaysia's history, how we achieved independence, psl raja2, ketuanan melayu. nothing relating to politics pun.
30 November 2009 at 11:36