- January 24, 2010
During this date 45 years ago, a former United Kingdom's Prime Minister who  known as Winston Churchill die peacefully in his home nine days after he suffered from severe stroke that left him gravely ill, at age 90, on the morning of the day, coincidentally 70 years to the day after his father's death.

He is one of British who involved during Malaya's War in 1948. This war known as Malayan Emergency. In Malaya, a rebellion against British rule had been in progress since 1948. Once again, Churchill's government inherited a crisis, and Churchill chose to use direct military action against those in rebellion while attempting to build an alliance with those who were not.While the rebellion was slowly being defeated, it was equally clear that colonial rule from Britain was no longer sustainable.

As a Malaysian, what we must know from this war was between Commenwealth armed forces and the Malayan National Liberation Army (MNLA) which headed by Chin Peng. The Malayan Emergency was the colonial government's term for the conflict. The MNLA termed it the Anti-British National Liberation War.The rubber plantations and tin mining industries had pushed for the use of the term "emergency" since their losses would not have been covered by Lloyd's insurers if it had been termed a "war".

Chin Peng Communist Leader's In Malaya During The War

Until now Chin Peng cannot entered Malaysia because of this ideology and maybe he will never make it. For me, it is a right decision of our government.When you see, pictures below, maybe you will be totally agree with me. 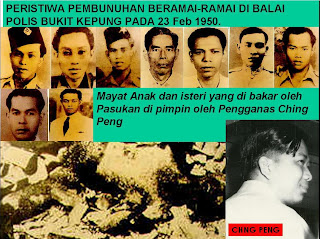 His sins During Bukit Kepong Evasion By The Communist .... 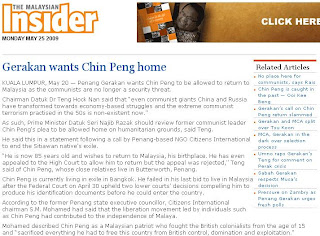